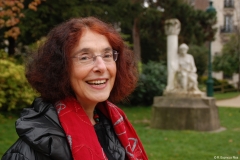 Sylvie Weil grew up in Paris, France and earned her degrees in Classics and in French Literature at the Sorbonne. After teaching at a lycée in France for two years, she taught at Barnard College, in New York City, and at Bennington College, in Vermont and in Paris. Until 2002 she was a professor of French Literature at Hunter College and at the Graduate Center of the City University of New York. She then decided to devote her time to writing. She is the author of several works of fiction for adults, and of a series of three novels for young adults, which are set in Champagne at the time of the first Crusade. The first of this trilogy, Le Mazal d’Elvina won the Prix Sorcières, one of the most prestigious prizes awarded in France for the best novel for young people.

Participant in the Vancouver Writers fest in 2004, the Rencontre Internationale des Ecrivains in Montréal, Québec, 2000, and in the Festival de la Nouvelle de Saint-Quentin, France (1989 and 1995).